Behind the house there is a small 4 section 10 meter mast which can be winched up and down. In the down position it is about 3,3 meters high. On top of this mast is a top section for the rotator and in it a 50 mm aluminium tube of 2.5 meters. On top of this aluminium tube is a 11 meter Spiderpole sliding about 60 cm over the top of the tube. The top section can be tilted towards the house. In the low position of the small mast and standing on the flat roof next to it I can reach up to about  60 cm on the tube. This is still 50 cm under the bottom of the Spiderpole.
In the low position the mast with Spiderpole has a total height of 16 meters. When the Spiderpole is on the tube the top section can still be tilted but the Spiderpole will be on the roof of our house. In the low and tilted position it is easy to add or remove the Spiderpole (by one person).

For the PACC contest I need a second yagi for 10-15-20 meters as I like to do (try) SO2R. So I bought a almost complete, never used 3 band HD Spiderbeam. The balun/choke was missing which was not a problem as I have several of them lying around. Check out the W1JR chokes on this website.

This Spiderbeam had to go into the small mast behind the barn (only for the PACC contest).

Normally  a Spiderbeam is constructed on the aluminium tube and placed as a whole on top of the (push up) mast or in my case on top of the small tower. The problems:

This makes it  impossible to put the Spiderbeam on the tower the way as described/intended by.Spiderbeam.

What is possible at my place is placing the Spiderbeam on the pole like a ‘normal’ yagi. So sliding it from the side on the tube in the mast. Then however one side of the antenna be opened up so it could be mounted on the tube on the small mast. Also there should be added a pole for the top and bottom guys to the center hub construction.  So I needed a center hub which is: 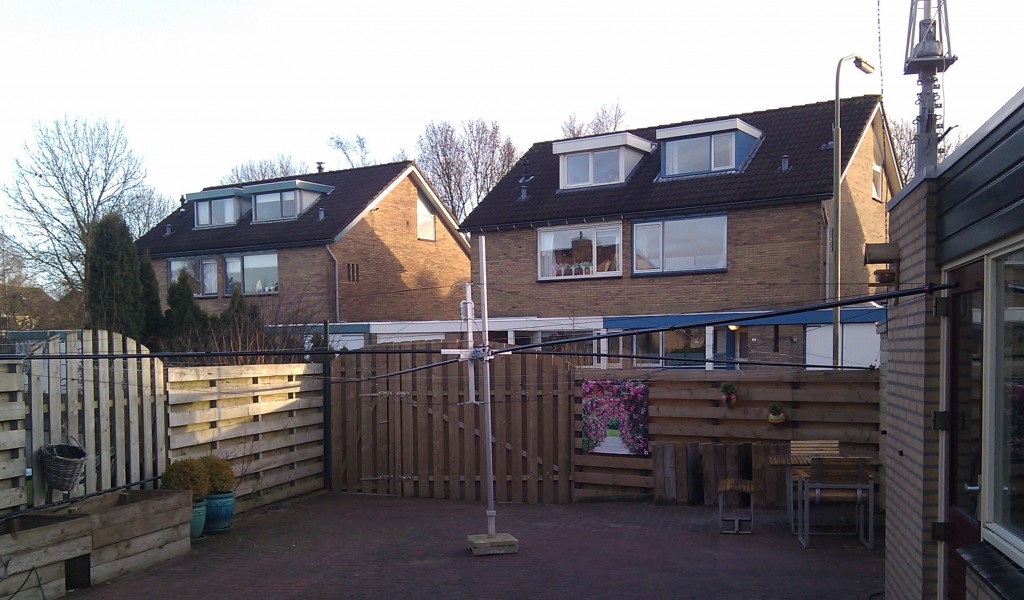 So a new center hub was made using 40 by 40 mm aluminium square pipe. This size was needed so it is big enough inside to put the 5 meter long fiberglass poles in. Added some additional 40-40 tube to make it rigid and top and bottom plates so the bolts would not bend the square pipes too much when putting it all together. Added an aluminium L profile for the mast-clamp and added a 1,10 meter vertical pipe for the top and bottom guy lines. As everything is square, 90 degree angles are easy to make. Everything was bolted together. Bought two 50 mm muffler clamps for the connection to the mast tube. In the top and bottom of the vertical tube a few holes (8 mm) were drilled for spanners  Eight (8) small spanners were bought from a local DIY store. 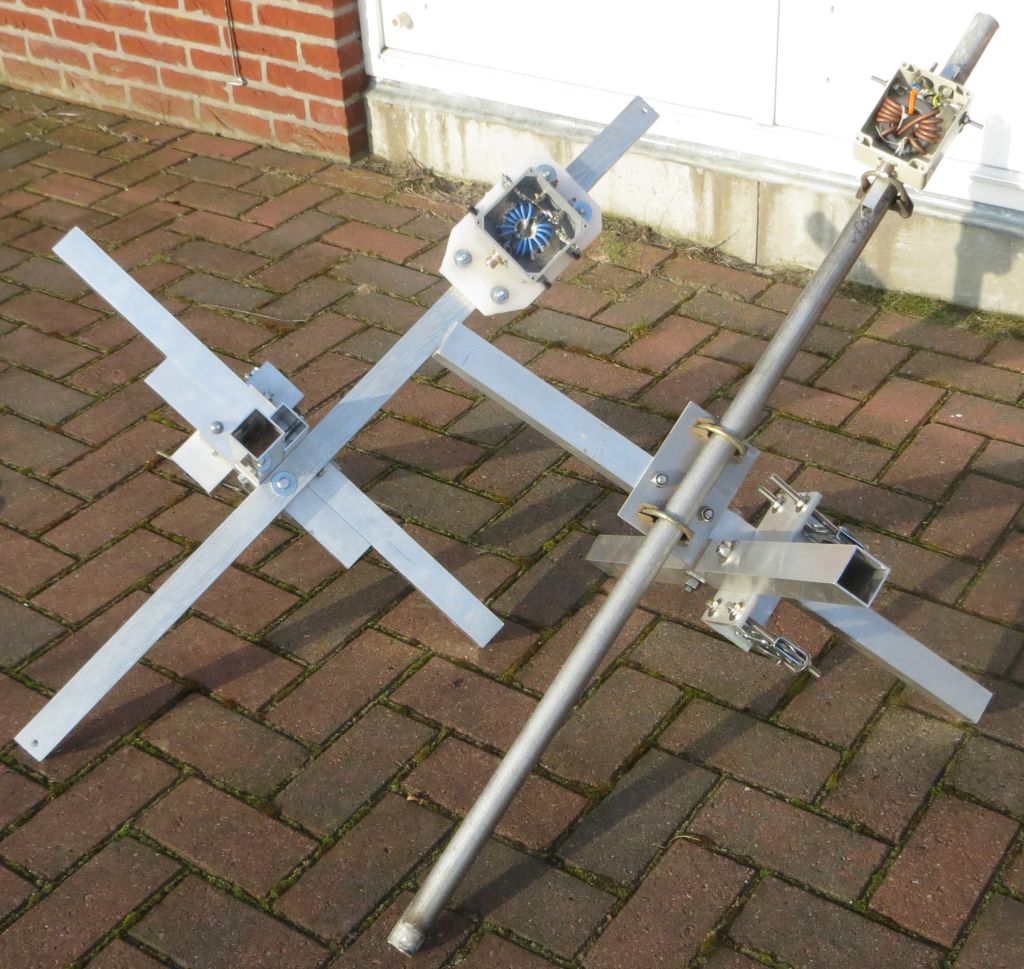 Spanners are used for the kevlar guy wires (top and bottom of picture). 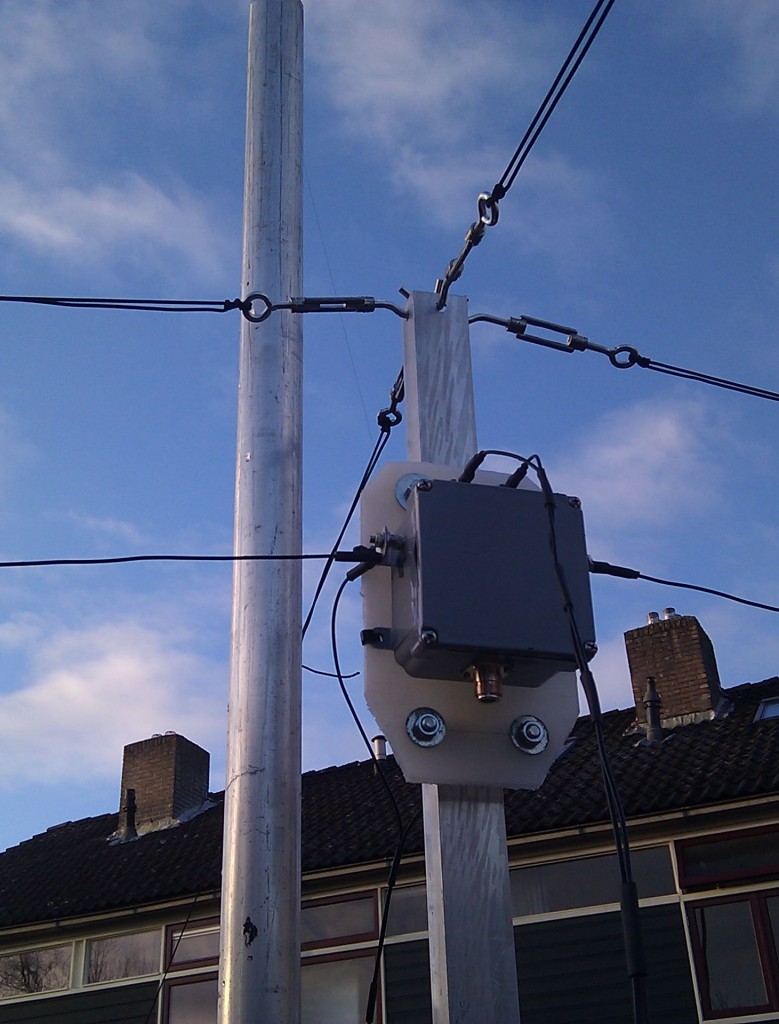 To fit the fiberglass rods in the 40 by 40 square tube some filling up had to be done. I used a tube (from a bicycle – about 30 cm long) and some tape to make it a tight/snug fit. This at the end of the tube and just before it would leave the aluminium square tube (about 25 cm from each other).

With the new center hub it took an additional 3 hours to put the antenna together in the back yard. All wires were already cut and made before that as described in the manual.

Reading the manual and finding all the correct information is a daunting (and annoying) task. Nowhere a nice table with all measurements. How high should the top guys be attached? And the bottom guys..

So made my own table with all measurements when adding the wires putting together the antenna. As I needed one side (quarter) open, when placing it on the small mast, those wires have to be attached last. After all wires were added, the dipoles attached to the balun/choke (40 cm above the cross section)  the SWR was checked. Wow very good.  When the antenna is close to ground always tune the antenna to the low end of the band (or even under it if you like CW). When it is on the tower the resonance frequency will move up.

With some help from friends the antenna was put on the tower which took another hour. By adding a one meter tube under the antenna it could be pushed up the ladder while one of my friends guided the fiberglass pole walking on the flat roof of the barn. With the new center hub the antenna was heavier but could be lifted in one piece including guy wires and still be handled very well. 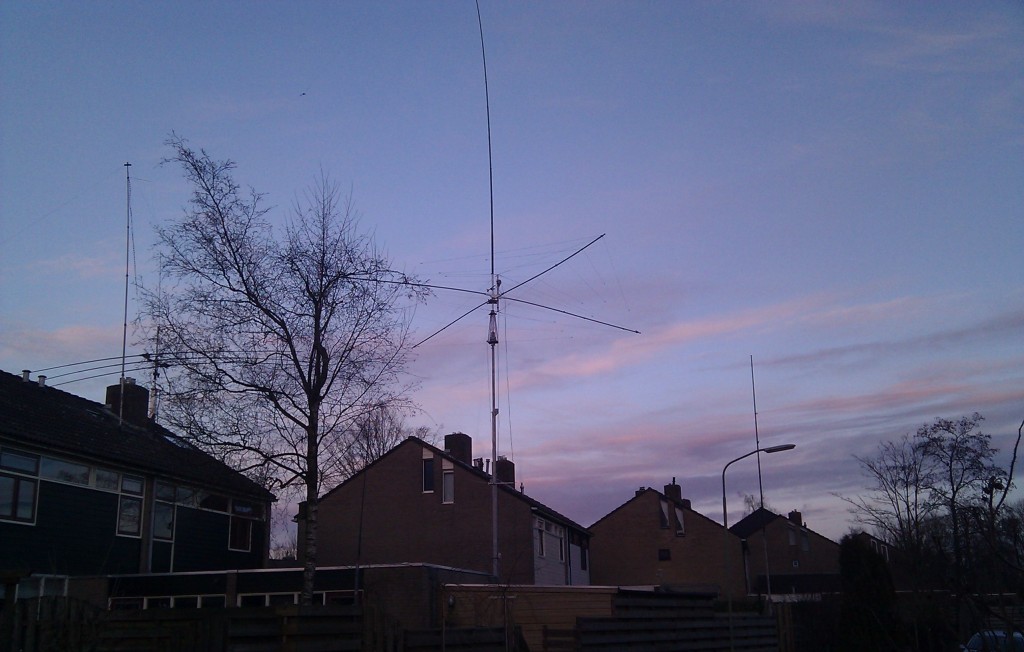 A week after the PACC contest we took the antenna down again by taking it apart standing on the flat roof.  It took about an hour to take it down and put all parts in the barn.  Ready for next year PACC.