Noot: This antenna is not being used anymore and replaced by a LZ1AQ crossed loop receive antenna. Please check the article on my website (link).

Living in a nice neighborhood with neighbors is mostly very fine but mostly not when you are a ham operator. There are many (plasma) televisions and other devices nearby which give a lot of noise on (especially) the lower ham bands. At my place reception on the low ham bands and especially AM on Medium Wave is dramatic. So I need reception antennas which are less susceptible to these noises. Loop antennas (magnetic) are known to accomplish this. So I build this simple active receive loop antenna to see if they work… and they do. The noise has reduced a lot and listening to the low bands is not annoying anymore.

The simple active receive loop used was found on the internet (link = broken). The article gives a very nice description how to build the antenna. The antenna uses easy to find materials and should not be hard to put together. After finding the hardware and components in the junk box, partly the junkbox from Timon, PA1T 🙂 making the antenna and box took between 1 and 2 hours. The pictures below show the schematic, box with loop and the pcb with components. As there are so little components and many places to use the connectors and pcb as earth no real pcb is needed.

There was a nice discussions about this active receive antenna (and others) on the Wellenforum (http://www.wellenforum.de) in German. This discussion was recently removed (26 February 2013).

The schematic above is a look-alike from the 1984 design of John G8CXQ (G4UAZ) (link). An improved design from G8CXQ has been published by Des M0AYF (link) with additional protection while transmitting using an additional relay.

Construction
The antenna has been made in a small junction box (Model # E989NNJ-CAR bought at Home Depot). The loop is made from 2 meter aluminium staff, 1 cm wide and 1 mm thick bought years ago from a local DIY store.

Below some pictures of the box and antenna before the active components were added.

Below the completed antennabox with components. No need to make a complete printed circuit board. The pcb is only used as ground surface. 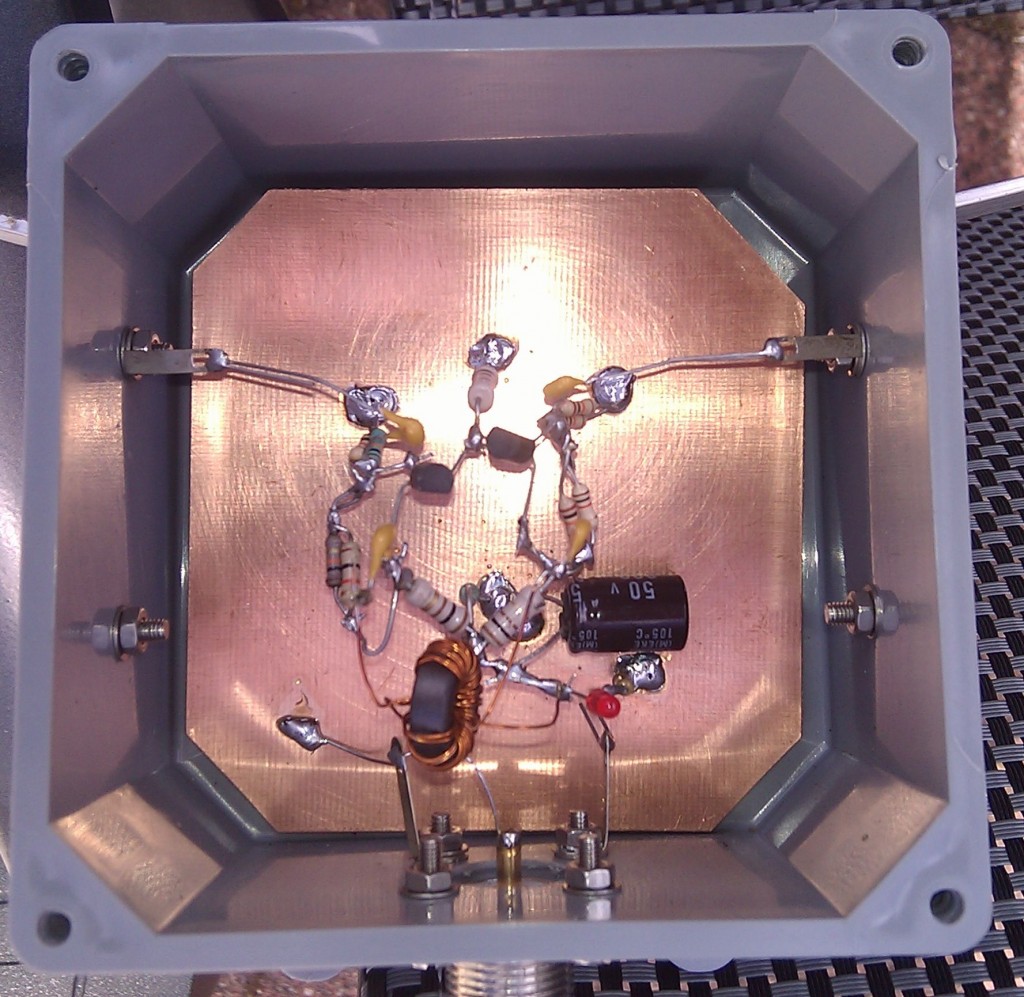 Results
The antenna works well with a pair of BC547B. Many local noises on the wire antennas are not heard and stations hard to hear on medium wave can be heard again. Much less man-made noise is heard which makes stations hard to hear on my wire antennas. Stations on the low bands can be heard again. Using a rotator below the loop antenna gives the possibility to null some sources of interference. As the diameter of the loop used is rather small the signals are not very loud.

A few things will be done the coming period.

15 september 2012
Updated the transistors from BC547B to 2N5109. Does it now work better? I have the idea that is receives better on the higher bands/frequenties. If you also make this active antenna I would start with the 2N5109 as transistors and skip the BC547B (but they work fine too and easy to obtain).

Note: The 2N5109 is hard to obtain nowadays. A replacement which can be used is the Philips BFW16A.

3 September 2012
Updated: 15 September 2012 – changed from BC547B to 2N5109 transistors
Updated: 20 March 2013 – Reception became bad as any wire outside. Probably due me transmitting on antennas too near.After changes below working as good as always.
– replaced one of the 2N5109 transistors which was defect.
– Added gas filled discharge device (90 volts) over antenna connections which I had lying around (CPC type CG2-1000L).
– changed the direction of the bolts in the sides so the loop can be removed without opening the box.
To DO: add protection relay over antenna connections