The first antenna everybody probably makes is a dipole and the second a quarter wave vertical. The third antenna will probably be a multiband version of these antennas (or yagi). This is the third antenna..

Below a small description of an easy to make and cheap multiband wire vertical. The antenna has like the fan dipole parallel wires for the bands for the bands it has to work on. All antenna wires are all attached to one side of the balun and attached to the center pin of the coax cable. All radials are all attached together to the other side of the balun and attached to the shield of the coax cable. Some distance is needed between the wires to make the antenna easy to adjust.See the picture of the first version for 10, 15 and 20 meters.

The pictures give an idea how I made the first example. It took me about 2 hours to make it.

Mast and wire support
There are several supports used for the wires on the sides of the mast. The center wire for the lowest band is attached alongside to the center mast. The other wires are supported using PVC electricity tubing. I like the gray ‘heavy duty’ tubing.

The distance from the center mast to the end of the side wires is 25 cm (10 inch). Not very critical but it was the total amount of tubing I had available which gave me this length. Don’t make the distance to the center mast very short (like 5 to 10 cm). Of course this can be done (like the Cushcraft R8 or Hy-Gain AV-620 / AV-640) but will make adjusting the lengths very critical.

As PVC is used no additional insulators are needed with low to medium power. The top of the wires will have the highest voltage and might need better insulation with high power.

The balun used is of the type W1JR using RG303 Teflon coax on a RK4 ferrite core bought from the DARC Verlag. This ferrite core is cheap and has good specs. Below two versions of the baluns I use.

Wire length
The length of the wires can be easily calculated using the formula for a quarter wave dipole which is 75 / frequency. Most ften we can take of 5 percent making the formaula (75 * .95) / frequency = 71.25/freq (per side of the antenna. Starting a bit longer will never hurt. Always start with the longest wire (lowest frequency) and then go back (from lowest frequency to the highest frequency). The wires are closely spaced and will interact. So some tweaking is needed to get it working for all bands.  The wire I use is 0.8 mm aluminum wire without insulation (cheap buy).

The mast length used has to be at least half to one meter longer than the longest wire length as a minimum but longer is always OK.

Radials
The radials have (about) the same length of the radiator wire for that band. Each band uses one radial (as a minimum). The easiest is to place the mast on a pole and slope the radials to all sides to ground poles/pins (of course isolated to ground). Also the radials need one or two spreaders.

Alternative antenna using double height.
An alternative is to double the mast length and also use spreaders for the radials below the feed point. Using this setup the coax cable has to be directed away from the feed point at a 90 degree angle. An extra PVC pipe could be used to have the coax extended out of the mast for 50 cm (or more) and then slope the coax to ground at a 45 degree angle.

Many more antenna configurations are of course possible.

Below a picture of the antenna on the back of our barn. It’s on a pipe and the radials are spread out over the flat roof. 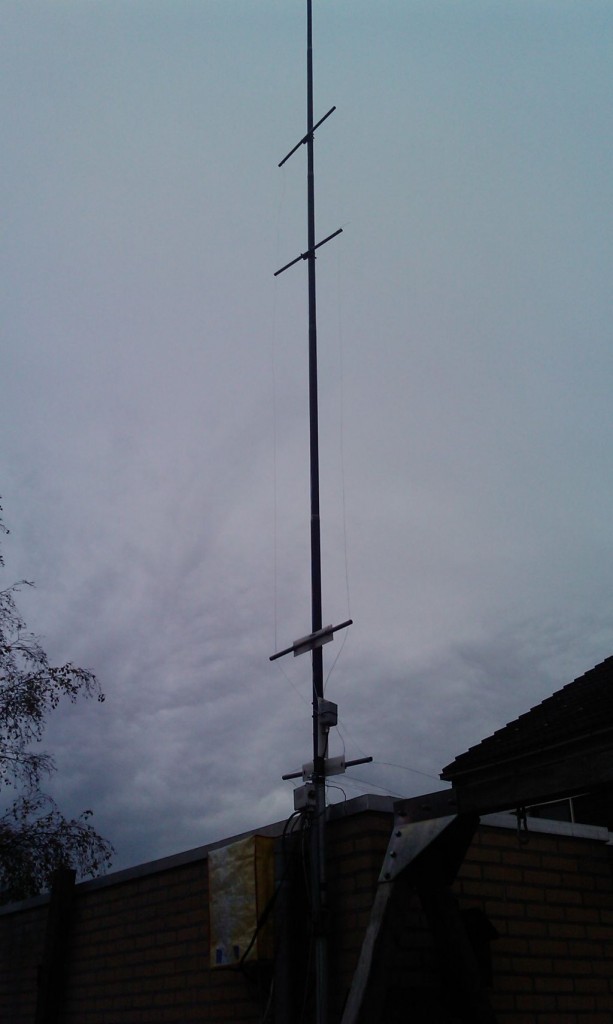