In my neighborhood is having a dipole or other wide antenna for the low bands not feasible. My lot is only 9 meters wide and around 13 meters length is available for antennas and wires (behind the house). This is by far not wide enough for full size dipoles for 80 or 160 meters. Not even a dipole for 40 meters will fit behind the house. So what to do?

The antenna…
A problem with a small lot is that the only thing you can do is go up in the air. But going up in height, and making for instance a quarter wave vertical for the low bands, mains you need preferable many and long radials. Having radials with a long length is not really possible and certainly not in all directions. Elevated radials might be possible and acceptable, but not straight wires, it will have many curves and bends to fit in the garden.

So having radials is not such a great idea. So a symmetrical antenna has to be the choice (so no verticals needing radials). The only (wire) antennas left are probably (trapped) dipoles and loop antennas.  I decided to make a trapped 80-160 meter vertical dipole with the feed point at 11 meters. 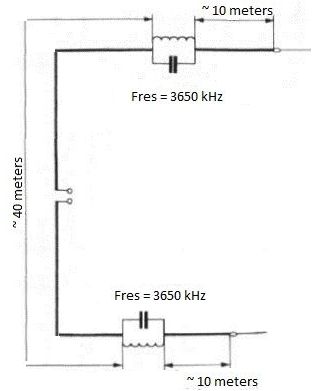 This is possible as I have a small crank up tower behind the house with that height. On top of that small tower is an aluminium tube and partly over that tube a 11 meter fiberglass pole from Spiderbeam. When fully cranked up the total height is 23 meters. To have the maximum current high in the air I choose to have the feed point at 11 meters. One side of the antenna (wire) goes up the 11 meter fiberglass pole and from the top towards the house. Half way in the air is an 80 meter trap. After the trap there is about 10 meters of wire making one side of the antenna 30 meters long. The other side of the antenna goes down from the feed point for about 8 meters. At that point it is bend towards the house about 30 cm above the flat roof of our barn/kitchen. As the length from the tower to the house is only 8 meters the antenna makes some nice bends above the flat roof for the other 22 meters of the antenna. In the side of the house (wood) I placed some isolators where the wire goes to and a small support in the middle of the roof for the trap (as it is a bit heavier).

The current distribution for 80 and 160 meters

The traps are made of very thin Teflon coax cable as the current version was created just for the PACC contest where I’m in the 100 Watt class. 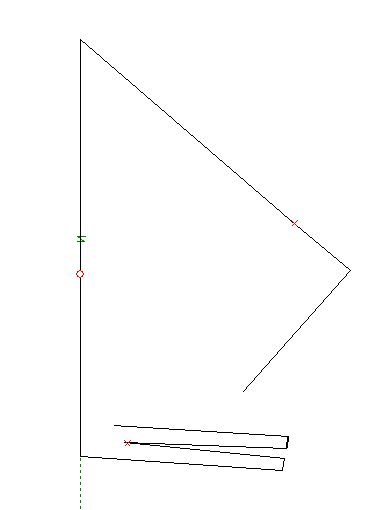 The antenna is fed with open wire half way the vertical part on the left (red circle). The bottom part of the antenna is at 3 meters and 30 cm’s above a flat roof. The most right of the bottom wire is attached to the house (using insulators). The cross is the 80 meter coax trap. The top is 23 meters high and goes to the right to a pole on the roof of the house. Half way there is another 80 meter coax trap. The rest of the antenna wire is pulled down with a rope.

Feed point
As the antenna is fed with open wire the feed point is just adding the open wire to the two antenna wires. The support I use is a PVC pipe used for electrical installations in the house about 60 cm ling which I place horizontal on the mast. The 300 Ohm open wire is small and fits inside the PVC pipe. It goes in one side and comes out the other side and there it is bend back and attached to the wires of the antenna. Using this construction both the open wire and the wire have some space from the steel mast. This space is much to small but not much more room available as the feed point turns with the yagi under it. This is certainly n issue with the setup used. Having the feed line running away from the antenna under a 90 degree angle from the antenna would be much better. If you can, please do so. 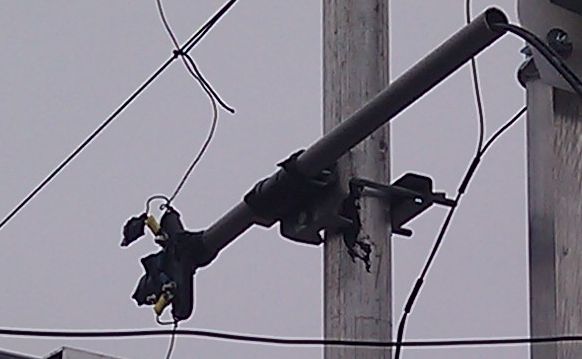 Wires above the flat roof 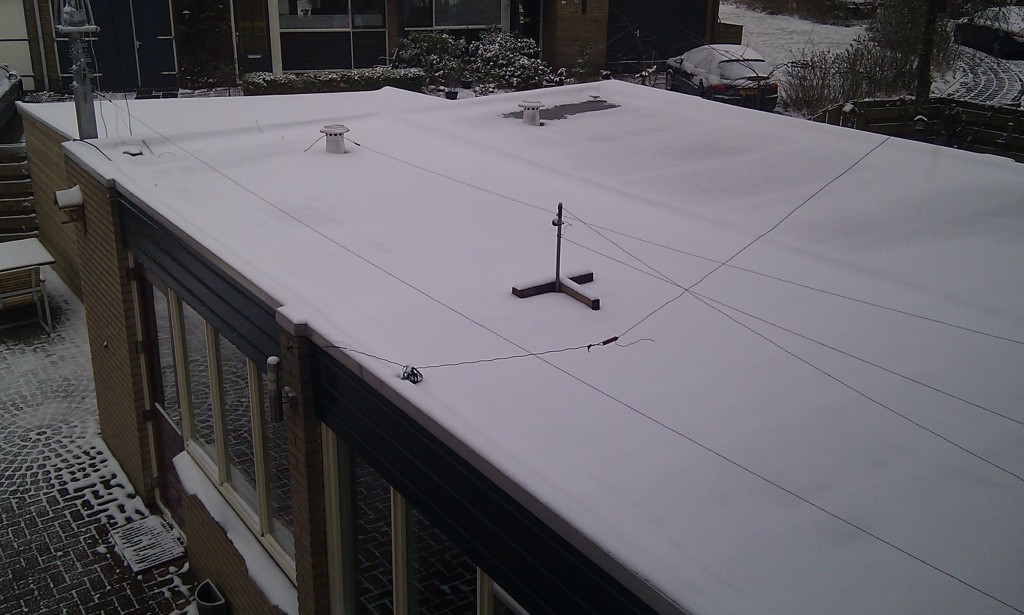 At the left the small 10 meter tower where the wire comes down 8 meters from the feed point. Then the wire goes to the bottom right of the picture (to the house (see picture below) and back to the small pvc pipe in the middle of the picture (then from wood, now replace with a concrete tile). On the pvc pipe the lower 80 meter coax trap is attched. The rest of the wire for 160 meters goes back to the house and the end attched to the small silver chimney (just for fresh air). 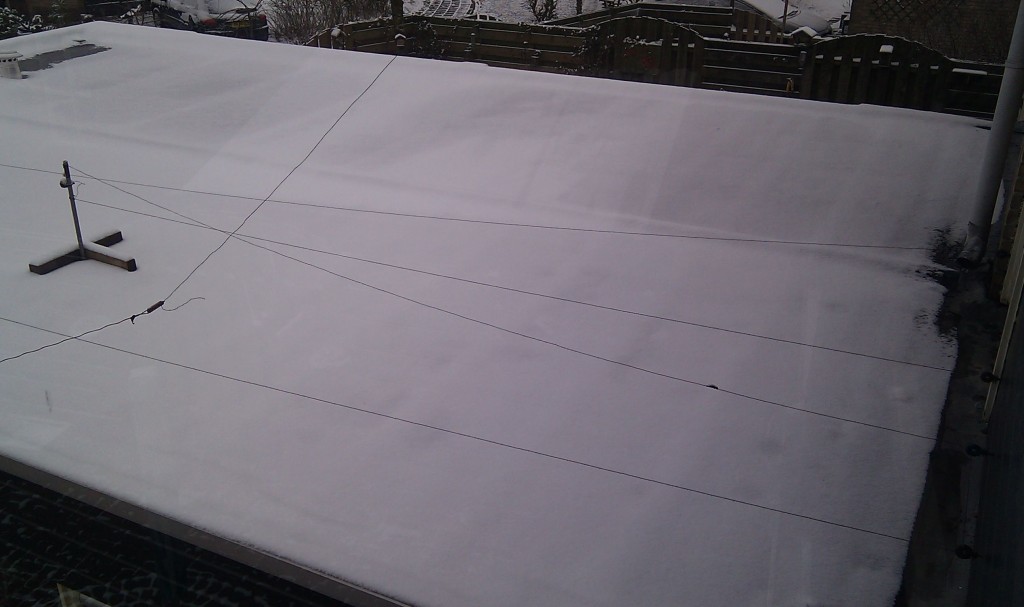 At the right the insulators in the wooden panel of the house.

Going up
The wire going up from the feed point leaves the top of the Spiderpole and slopes down to the house. Half way there is the 80 meter coax trap. With heavy wind it will bend the top of the Spiderpole quite a lot. So the trap has to be light and strong. The rest of the wire for 160 meters after th trap goes to the house and down to the flat roof. Sorry no detail picture… check the picture at the end.

Traps
The traps used are made from thin Teflon coax cable. The type used is xxxx and came from commercial VHF equipment (tnx guys). The length was almost 3 meters and when nicely put (next to each other) on a coilform the resonance frequency was 4,5 MHz. Ouch to high by over 1 MHz. Then tried it again and made the coil not that nice, layers over each other and bingo.. 2,7 MHz. Took of about 30 cm and it was resonant in the middle of 80 meters.

The picture below shows both traps and a piece of the teflon coax used (fine when using 100 watts). Light weight as one hangs in the air (from the fibre glass pole). 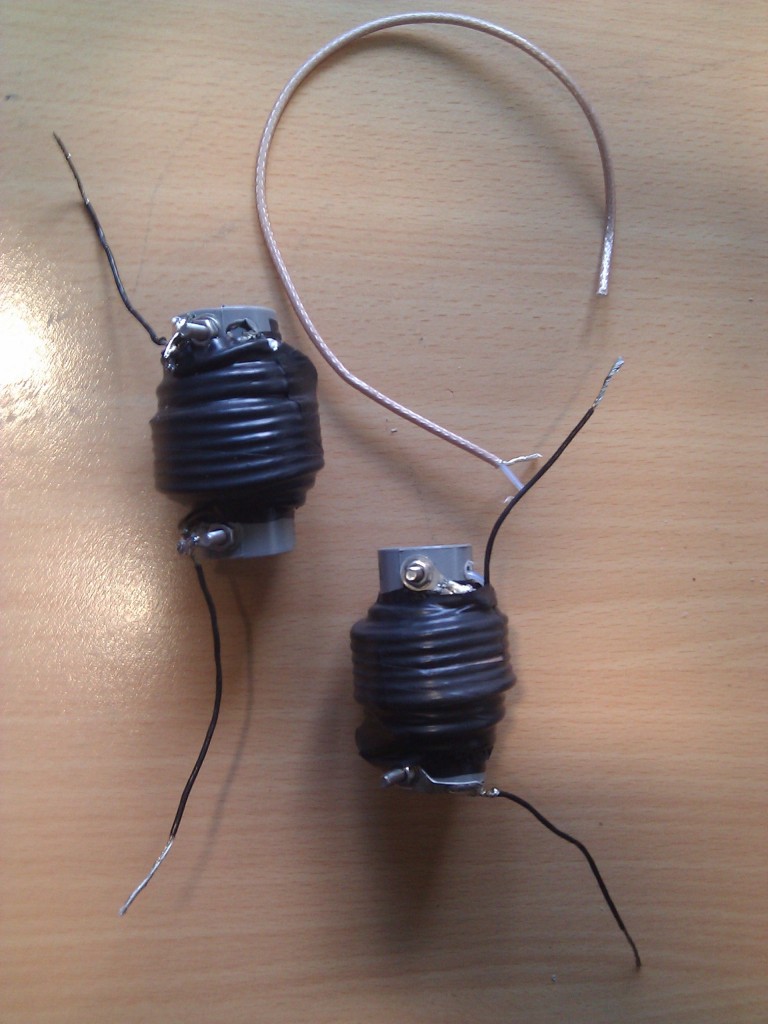 Adjusting the antenna
The antenna was hung next to the tower, taped on the fibreglass pole like described above.

To check the resonances I first used a small piece of coax to the analyzer to have the antenna resonating in the middle of the two bands. Using my miniVNA PRO with Bluetooth it was easy doing this up at 11 meters with the Android tablet below. After shortening the wires a bit, the SWR was fine on both 80 and 160. Then I replaced the short coax feed line with open wire. The advantage with open wire is that the antenna can be tuned from 3500 to 3800 kHz and from 1810 to 1900+ kHz.

Open wire tuner
A remote open wire tuner was needed as the tuner had to go inside the barn next to the small tower. As always I choose for the proven design of PA0FRI, the S-match antenna tuner. Not using a rolling inductor this time but fixed taps on a loading coil and fixed (variable) capacitors. The trick is that everything can be switched on and off using relays. The best part is another variable capacitor which can be remotely tuned using a small 12 volt motor (bottom right). 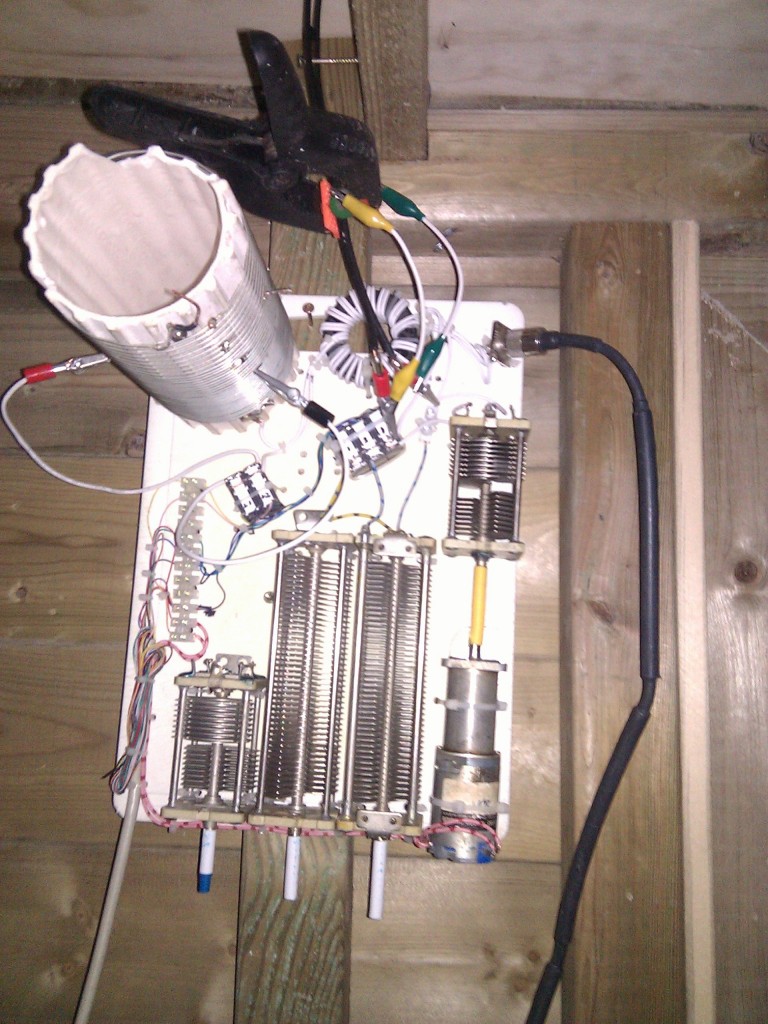 The cable bottom left is the cable from the shack to switch the relays (switched with box in the shack).
Next to this cable a spare capacitor (not used). Then two variable capacitors. One used for (and tuned to) bottom 80 meters. The next one for bottom 160 meters. The a 12 volt DC motor with a variable capacitor which allows me to tune up the selected band (with the relays). The capacitors are not large as they are only used with 100 watts. On the shaft of the capacitor plastic tubes (from ball point) so turning the capacitor will not give too much additional ‘hand effect’. Above the variable capacitors are at the left 2 relays to select on the coil a position 80 meters and one for 160 meters. To the right another three relays for the three variable capacitors. Upper right is the balun from the S-match tuner and the coax feeding cable. On the feeding cable are ferrite cores so the coax will not radiate (too much). Bought from DX-wire (you can choose for a standard and a low band version). At the upper right the coil used. As the capacity needed was not enough I placed a fixed capacitor direct over (in parallel) with the switchable relays.Clipped on the open wire which goes up. The white board on which all materials are placed on is a cutting  board from the kitchen. Easy to drill and everything strapped on the board with ty-raps.

Switch box inside the shack 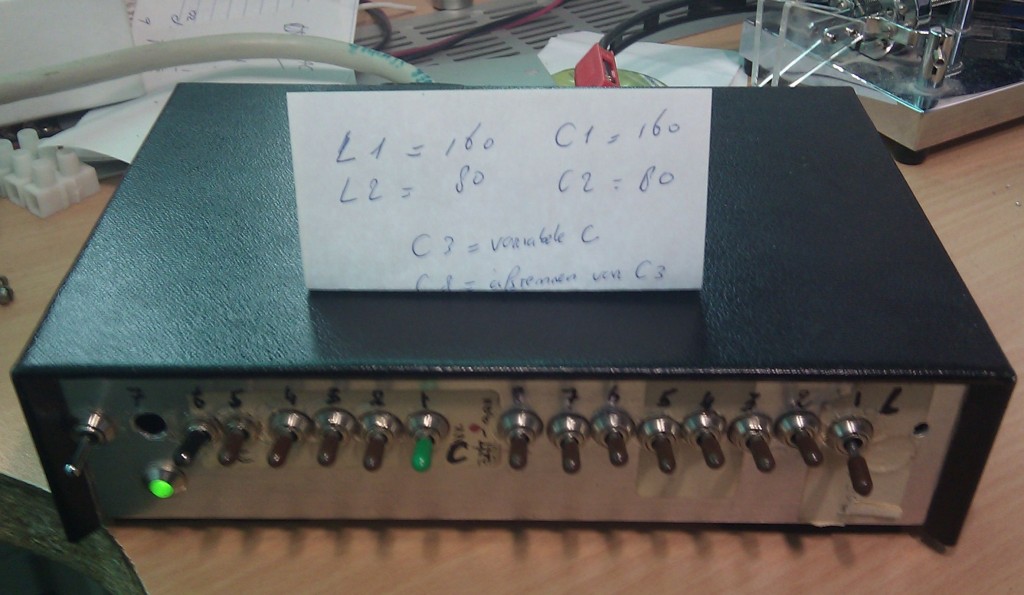 Inside the shack the relays can be changed using a box with 5 switches for the relays and one 3 position switch for the DC motor (which falls back to the middle (rest) position when not used. The box shown has been made a long time ago and was used for a remote tuner with many relays. L1 selects the 160 meter tap on the coil. L2 the tap on the coil for 80 meters. C1 selects the fixed variable capacitor for 160 meters and C2 selects the fixed capacitor for 80 meters. C3 selects the variable capacitor attached to the 12 volt DC motor. The turning of the motor is done with a three position switch (the one most left). Up is turning left, down is turning right, middle is the rest position.

Using the antenna with a rotating antenna in the small tower
When the antenna was put up the tower was empty with only the fibre glass pole in top. During the PACC however I needed a second yagi for 10-15-20 and bought a Spiderbeam. With this antenna in the tower a problem arose. The wire had to go through the Spiderbeam and this yagi however could turn 360 degrees, I choose to place the wire through the Spiderbeam so it never had to go more than 180 degrees to both direction. As there had to be some extra length in the wire when the yagi is turned. 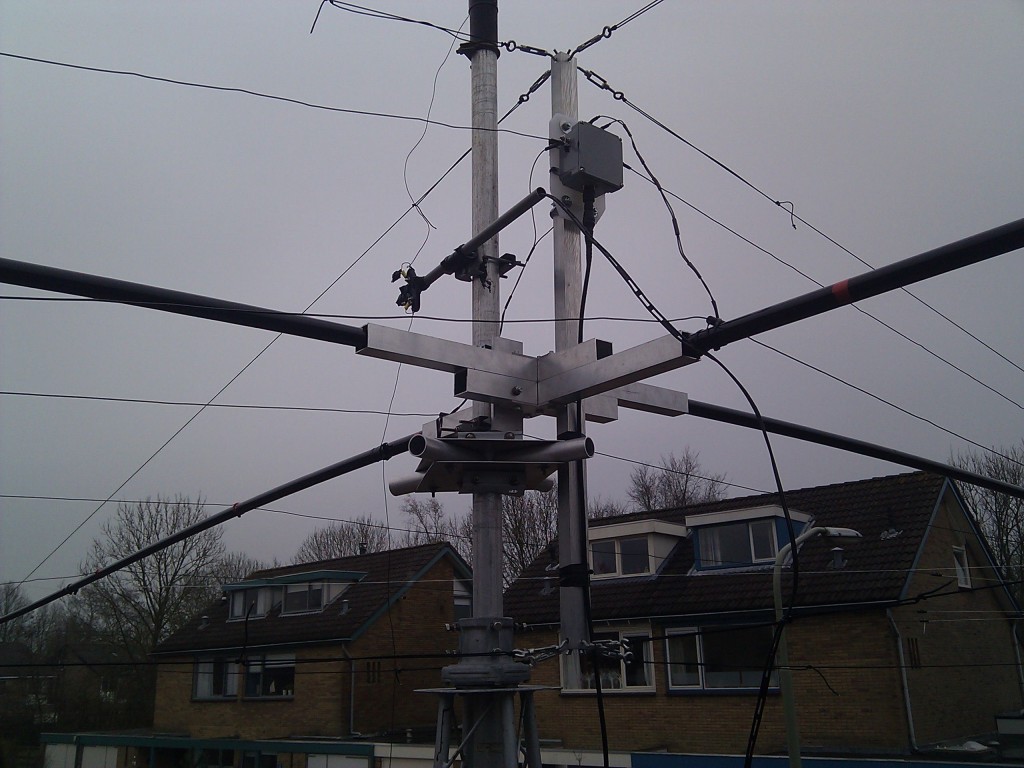 Conclusion
Does it work? Yes it does. Of course it is not as good as a full size vertical with many radials or a full size dipole. One of the most important aspects of this antenna is that it totally fits inside my lot. As already stated it is the best antenna I used before at my current location. Could you do better, of course. But can you do it in the same small space?

Below the antenna used during the PACC 2013 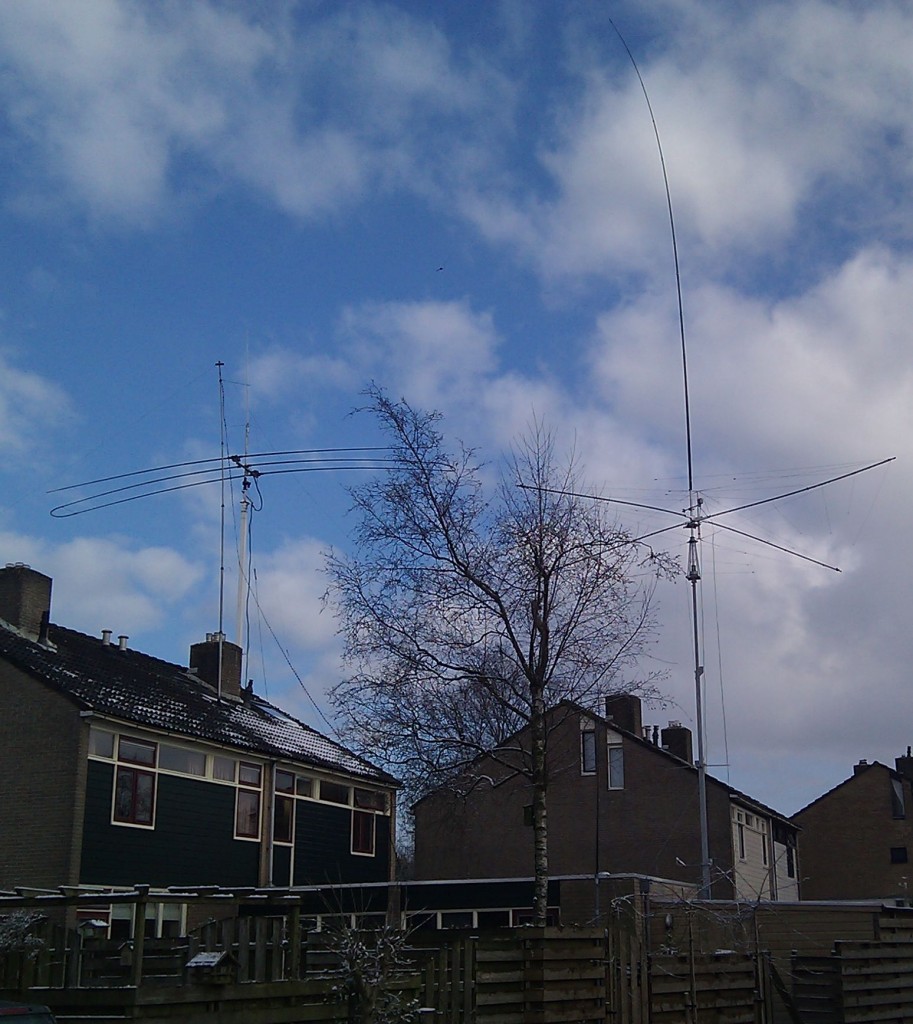 During the PACC 2013 I used this antenna for 160 meters. Sometimes on 80 meters but there the 80 meters 2 * 20 meter dipole fed with open wire gave me more qso’s. The tower on the right in the picture supports the antenna as described above. The small mast through the roof on the left supports the top wire to the house. In the back a small square aluminium tower next to the house supports my two element SteppIR. The SteppIR is the only antenna which is always available.